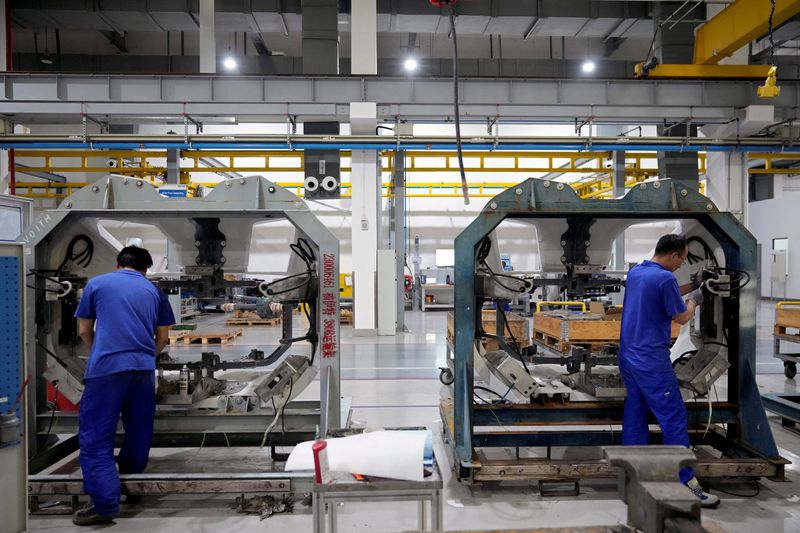 By Liangping Gao and Ryan Woo

As the coronavirus has spread in China, Beijing has imposed prolonged lockdowns in several places. The clampdowns have hit production at the world’s biggest iPhone factory of Apple Inc (NASDAQ:) in China, and, according to an analyst’s estimate, now impact about a quarter of the country’s gross domestic product.

The stringent COVID-19 measures also stoked rare street protests across many cities over the weekend.

Against this backdrop, the official manufacturing purchasing managers’ index (PMI) came in at 48.0 for November against 49.2 in the previous month, the lowest reading in seven months, according to data released by the National Bureau of Statistics (NBS) on Wednesday. Economists in a Reuters poll had expected a PMI of 49.0.

Separately, the non-manufacturing PMI, which looks at service sector activity, fell to 46.7 from 48.7 in October, also the lowest reading in seven months.

The 50-point mark separates contraction from growth on a monthly basis.

The world’s second-largest economy, already suffering from the impact of a property slump and weakening global demand for Chinese goods, is facing added pressure from new COVID-19 cases which hit a record on Nov. 27. Cases have edged lower since then.

“Downside risks continue to grow as the virus situation continues to worsen and will weigh heavily on the economy into 2023,” said Sheana Yue, China economist at Capital Economics, in a research note on Wednesday after the PMI data release.

The sub-indexes for manufacturing PMI including output, employment and suppliers’ delivery times all shrank in November at a faster pace than the month before, the data showed.

Chinese authorities this month rolled out a flurry of policies to prop up the economy, including reserve requirement ratio cuts and COVID-19 fine-tuning measures, while loosening financing curbs to rescue the property sector.

The securities regulator earlier this week lifted a ban on equity refinancing for listed firms, in the latest support measure for the cash-squeezed real estate sector.

But Yue of Capital Economics said that such measures by themselves are not enough to give a significant boost to economic activity and much would depend on how China tackles the coronavirus spread.

“Recent policy support is not enough to stem the housing downturn, the deepening global downturn will continue to weigh on exporters, and weak credit demand is constraining the PBOC’s (central bank’s) ability to provide more policy support in the near-term,” Yue wrote in the note.

The official manufacturing PMI largely focuses on big and state-owned firms. The private sector Caixin manufacturing PMI, which centres more on small firms and coastal regions, will be published on Thursday.