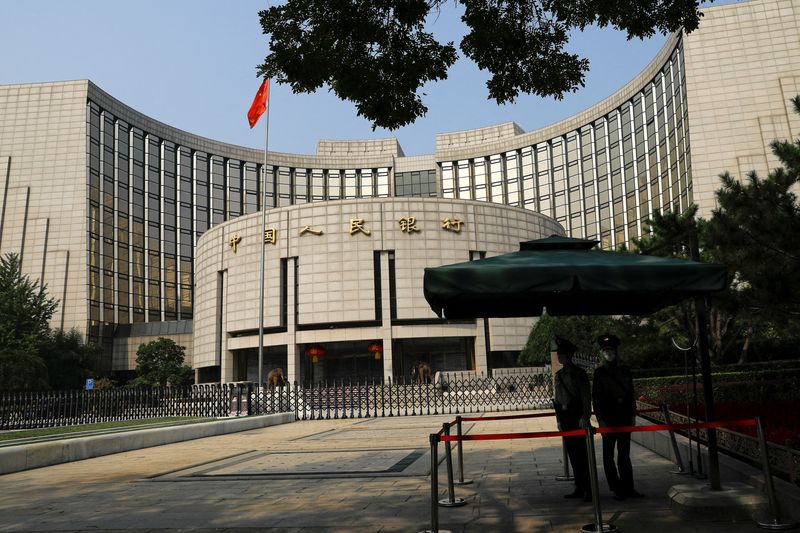 BEIJING (Reuters) – China’s $17 trillion economy is headed for one of its worst showings this year in almost half a century, but its central bank has limited options in its armoury for providing policy support as it would want to avoid stoking capital flight.

The People’s Bank of China (PBOC) is, therefore, poised to ramp up targeted support for troubled sectors, adding to the nearly $800 billion in loans it has already made through its structural tools, according to policy sources and analysts.

The PBOC, while seeking to bolster an economy hobbled by COVID-19 curbs and a property malaise, is expected to avoid aggressive stimulus that could fuel inflationary pressures and risk outflows from China, weakening the yuan, they said.

The PBOC’s room to maneuver has been crimped by a global tightening spree led by the U.S. Federal Reserve’s aggressive rate rises to tame inflation, although Fed Chair Jerome Powell has hinted its pace will be slowed.

Since 2020, when the world’s second-largest economy was first jolted by the coronavirus, the PBOC has expanded its arsenal of structural policy tools, including relending and rediscount facilities and other low-cost loans.

It has offered cheap loans to support small firms, transport and logistics – sectors hardest hit by COVID – and sectors that fit within Beijing’s long-term development goals such as tech innovation, elderly care, and carbon reduction.

“The central bank is likely to expand the scope of structural policy tools and step up the use of such tools,” said a person involved in policy discussions who spoke on condition of anonymity.

“We will not resort to flood-like stimulus, but will make policy more targeted and more efficient to ensure reasonable and sufficient liquidity.”

The PBOC did not respond to Reuters’ request for comment.

Its outstanding loans made via structural tools amounted to nearly 5.6 trillion yuan ($781.64 billion) at the end of September, central bank data showed.

The PBOC has pledged 200 billion yuan in special loans last month to rescue the property sector, and 154.3 billion yuan in loans in October to policy banks via its pledged supplementary Lending (PSL) facility to fund infrastructure projects.

The central bank last week announced it would cut banks’ reserve requirement ratio (RRR) for the second time this year, releasing about 500 billion yuan in long-term liquidity, reducing the room for using the traditional tool. The average reserve ratio has been slashed to 7.8% from 14.9% in 2018.

“What I expect is that the PBOC will exercise some form of unconventional monetary policy to increase the efficiency of this RRR cut,” Iris Pang, chief economist for Greater China at ING, said in a note.

All eyes are on the closed-door Central Economic Work Conference in December, when Chinese leaders are expected to chart the policy course for the economy in 2023.

Chinese government advisers have told Reuters that they would recommend economic growth targets for 2023 ranging from 4.5% to 5.5%. A central bank adviser said last month that China should set a growth target no lower than 5% for next year.

Top leaders are expected to endorse a target at the December meeting, although it will not be announced publicly until China’s annual parliament meeting, usually held in March.

Beijing is likely to double down on an infrastructure push in 2023, issuing more debt to fund big-ticket projects, while the PBOC supports with modest easing, policy sources said.

“We face some policy constraints (from the Fed moves), there is no doubt about that,” Yu Yongding, an influential government economist who previously advised the central bank, told Reuters.

“But there is room for monetary policy easing as long as inflation does not pick up. The main danger for China’s economy is that the growth rate is too slow.”

China is on track to miss the official growth target of “around” 5.5% this year, with economists forecasting it to grow by about 3%. Excluding the 2.2% expansion in 2020, it would be the weakest growth since 1976, the final year of the decade-long Cultural Revolution that wrecked the economy.

Analysts see no imminent inflation pressure, but the PBOC has warned that inflation could pick up once consumption recovers. Consumer inflation eased to 2.1% in October.

On Nov. 21, the central bank kept its benchmark lending rates unchanged for a third straight month. The one-year loan prime rate (LPR) was kept at 3.65%.

The yuan has fallen about 10% against the U.S. dollar this year, despite China’s capital controls.