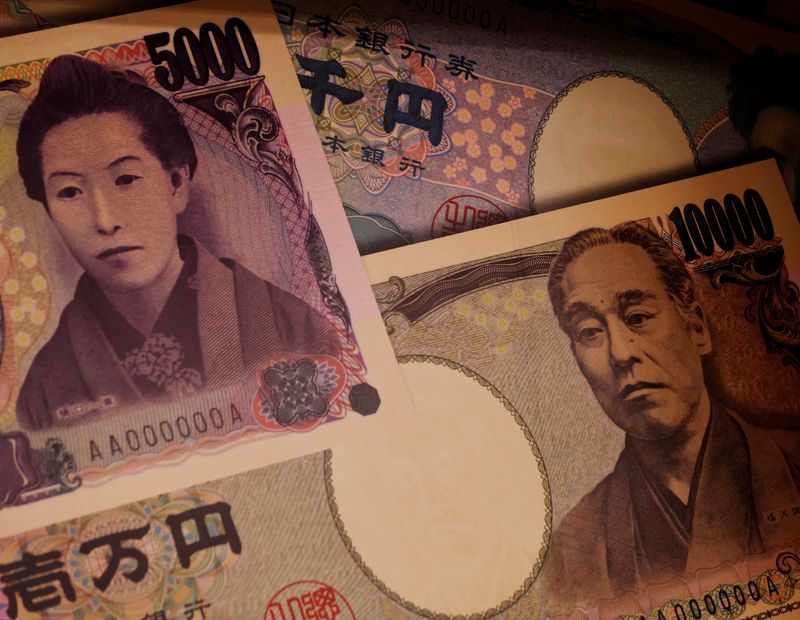 © Reuters. Examples of Japanese yen banknotes are displayed at a factory of the National Printing Bureau producing Bank of Japan notes at a media event about a new series of banknotes scheduled to be introduced in 2024, in Tokyo, Japan, November 21, 2022. REUTERS/Ki

AKITA, Japan (Reuters) -Bank of Japan board member Asahi Noguchi said on Thursday the central bank could “pre-emptively” withdraw monetary stimulus if trend inflation, which takes into account wage and services prices, overshoots expectations and stays above its 2% target.

A proponent of massive monetary easing, Noguchi said the likelihood of a near-term exit from ultra-loose policy was slim as more time was needed to determine whether wages would rise enough to keep inflation sustainably around the BOJ’s 2% target.

But he said the chance of Japan experiencing a positive cycle, in which wages rise in tandem with inflation, has “clearly” heightened compared with pre-pandemic levels.

“Trend inflation hasn’t reached 2% yet. But if there’s certainty that level will be met, it won’t be surprising for the BOJ to shift monetary policy,” he said.

Japan’s core consumer inflation, which strips away volatile fresh food but includes fuel costs, exceeded the BOJ’s 2% target for seven straight months in October as the weak yen propped up the cost of already expensive fuel and food imports.

But wage and service prices have barely risen, keeping the BOJ cautious of following in the footsteps of other major central banks in withdrawing stimulus.

Noguchi said he was focusing on wages and services prices in determining whether Japan’s trend inflation was perking up.

Average nominal wage growth of around 3% would be necessary to ensure consumer inflation remains sustainably around 2%, though a single year’s achievement of 3% wage growth alone would not automatically lead to an exit from easy policy, he said.

“We need to make sufficient checks and ensure that the channel in which prices and wages rise moderately and simultaneously, is functioning,” Noguchi said.

“It might not be enough to see this channel working for a single year. We need evidence the trend will continue.”

When asked whether he was ruling out the chance of an exit from easy policy next year, he said: “Whether the timing would be 2023 or 2024 would be data-dependent.”

The remarks by one of the BOJ board’s most dovish members underscore a gradual shift in policymakers’ attention towards the risk of an inflation overshoot, as more companies pass on the rising cost of raw material to households.

The BOJ remains an outlier among a global wave of central banks tightening monetary policy to combat soaring inflation, as it focuses on propping up a fragile economy only recently emerging from the COVID-19 pandemic’s scars.

BOJ Governor Haruhiko Kuroda has said the central bank has no intention of rolling back stimulus until strong domestic demand and wage growth, instead of cost-push factors, drive up inflation toward its 2% target.

Meta ‘powering through’ with Metaverse plans despite doubts — Zuckerberg By Cointelegraph

Meta ‘powering through’ with Metaverse plans despite doubts — Zuckerberg By Cointelegraph