Bank of America strategists think that the will end up at the 4,000 level a year from now and it has cut its forecasts for the index’s annual earnings per share (EPS) 9% to $200 which is 15% short of consensus estimates. Its bear-case scenario is for the S&P to slide to 3,000 on the back of falling profit margins.

According to the investment bank, the coronavirus lockdowns caused a Great Resignation which has led to a labor crisis in America. Since December, there have been two job openings for each unemployed worker. And even when the U.S. Federal Reserve began aggressively tightening monetary policy in August, there were still about 1.9 jobs per unemployed person. This lack of balance gives all the power to the employee as employers must try to keep staff.

Citibank expects this trend to continue, which will result in wage growth at a faster pace than companies can increase prices to pass, thus increasing their cost base and denting profitability.

I agree with Bank of America’s bearish scenario and had put a on the index in August, when it was trading at 4,120. At the time, Federal Reserve Chair, Jerome Powell joined President Biden in pushing back on the idea of a recession or a hard landing, citing the strong employment market.

Biden’s use of the jobs market was disingenuous as employment is a lagging indicator because it tends to rise in a recession when companies’ profits are already falling. The housing market is the ultimate leading indicator and in August house prices posted their sharpest decline since 2011.

U.S. house prices fell 0.8% in September, the third consecutive monthly decline since Biden’s and Powell dismissed the possibility of a recession, setting off the second-biggest home price correction since WW2.

The fact that Biden and Powell used the robust jobs market to argue that the drop in in the first two quarters of 2022 were not an indication of a recession is ironic. The extremely tight job market added to U.S. inflation, which forced the Fed to raise interest rates, which has driven us into a recession.

So let’s look at the supply-demand trend. 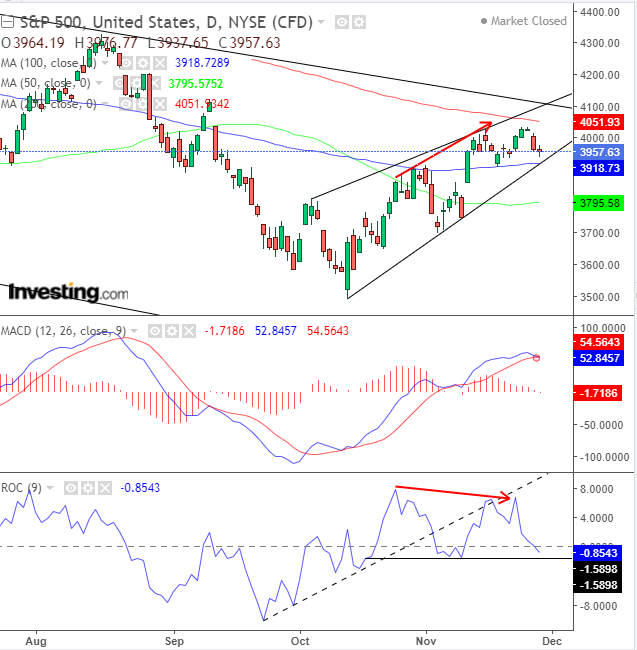 The S&P has been rising in the short term. However, the constricting rise as the lows advance more sharply than the highs is creating a rising wedge. This pattern is bearish as bulls, frustrated at the lack of progress, grow impatient and exit positions.

The fact that it climaxes as the short-term uptrend meets with the falling channel top, representing the medium down-trend, lends the wedge’s bearish dynamic further credence. Finally, the 200 daily moving average (DMA) has resisted the price since April and realigned with the channel top. The MACD’s short MA just crossed below the long MA, demonstrating that the weakness is broader than the daily prices. At the same time, the ROC, which is more sensitive than RSI, provided a negative divergence to the price, demonstrating declining participation as the benchmark climbs, leaving it vulnerable.

Conservative traders should wait for the wedge to complete with a downside breakout below the 100 DMA, forming a small double-top, then wait for the return move to confirm the wedge’s resistance.

Moderate traders would wait for the downside breakout.

Disclaimer: The author does not hold any of the assets mentioned in this article.

That Knee Surgery You Postponed Could Soon Hobble Insurance Giants

That Knee Surgery You Postponed Could Soon Hobble Insurance Giants