Senior leaders in South Africa’s African National Congress will discuss Cyril Ramaphosa’s fate on Thursday after a report to parliament said the president violated his oath of office with the theft of more than $500,000 in cash that was stuffed inside a sofa on his private game farm.

Ramaphosa is under pressure to step down after a panel led by a former chief justice said on Wednesday that he may have broken an anti-corruption law and should be probed further by lawmakers for possible impeachment over the scandal.

His presidency was plunged into crisis overnight by findings that he failed to properly report the 2020 heist to police and wrongly sought his Namibian counterpart’s help in the matter. Ramaphosa cancelled a planned appearance before the upper house of South Africa’s parliament on Thursday, deepening a sense of chaos over the report.

The findings are a body blow to Ramaphosa’s image just weeks before he stands for re-election as leader of the governing ANC on a platform to combat graft.

Ramaphosa, one of South Africa’s richest men, won a clear lead in party nominations for leader this month, close to five years after the trade unionist-turned-businessman replaced the corruption-tarnished Jacob Zuma and pledged to clean up the state.

He has always denied wrongdoing over the robbery at his Phala Phala farm, which was only revealed this year when a former head of South Africa’s spy agency under Zuma accused the presidency of a cover-up.

The panel on Wednesday found “there was a deliberate decision to keep the investigation secret” after the robbery.

“The president abused his position as head of state to have the matter investigated and seeking the assistance of the Namibian president to apprehend a suspect” in the neighbouring country, the panel said.

Namibia’s president Hage Geingob has denied giving Ramaphosa any inappropriate assistance in the Phala Phala case. Neither government has denied that a request for assistance was made.

South Africa’s presidency said Ramaphosa would give the panel’s report “careful reading and appropriate consideration in the interest of the stability of government and that of the country”.

Ramaphosa told the panel that the money was legitimate proceeds from selling buffalo to a Sudanese businessman for $580,000, and that he had reported the theft to his head of presidential security.

But the panel said the law required him to have reported to the police directly. Ramaphosa may have committed serious misconduct “by exposing himself to a situation involving a conflict between his official responsibilities and his private business”, the panel said.

The panel added there were “a number of important questions relating to this transaction that remain unanswered”, such as why the buffalo that were sold remained on Ramaphosa’s farm more than two years later and why the money was hidden inside a sofa. 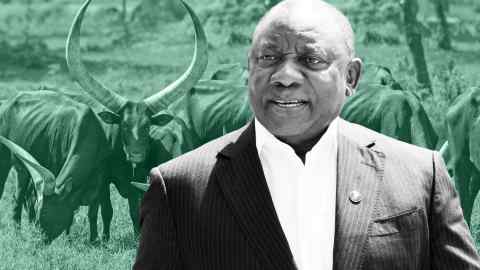 More money also appears to have been stolen from the sofa than the sum received for the buffalo sale, the panel added.

“The cumulative effect of all of this is that there is a substantial doubt about the legitimacy of the source of the currency that was stolen. This is a very serious matter.”

South Africa’s central bank has been carrying out its own investigation into whether the money was properly reported as foreign currency under South African exchange regulations. It is yet to report back.

“The panel makes some serious findings against the president, chief among them being that he may have violated the constitution,” said Siviwe Gwarube, chief whip for the main opposition Democratic Alliance.

“While a vote on whether to institute impeachment proceedings against the president requires a 50 per cent majority, we do hope that the ANC in parliament will put party interests aside and abide by the constitutional obligation we all have,” Gwarube added.

India to leapfrog to third largest economy by 2030