After FTX/Alameda Research imploded, we are seeing a dual migration of digital assets. As bank runs threaten centralized exchanges, decentralized exchanges are taking up the trading volume. Consequently, DEX tokens are surging ahead of their CEX counterparts.

The decade-old mantra “not your keys, not your coins” seems to have taken full effect after the FTX collapse. Decentralized exchange is getting into the top range of the world’s CEXes. In the last 24 hours, Uniswap DEX achieved $1.10 billion trading volume or $2.85 billion since November 13th.

Comparatively, the second largest CEX, Coinbase (NASDAQ:), is on a downward trajectory, at $1.9 billion, a -16% reduction since Monday. Given the wide gap between employees servicing both platforms, fewer than 100 on Uniswap vs. over 5,000 on Coinbase, this is quite telling.

As a result of this spike in self-custody and decentralized finance, DEX tokens are also on the upswing. According to Delphi Digital, the DEX basket of tokens is up by +24% vs. the equivalent CEX basket, which is down by -2% since November 11th. 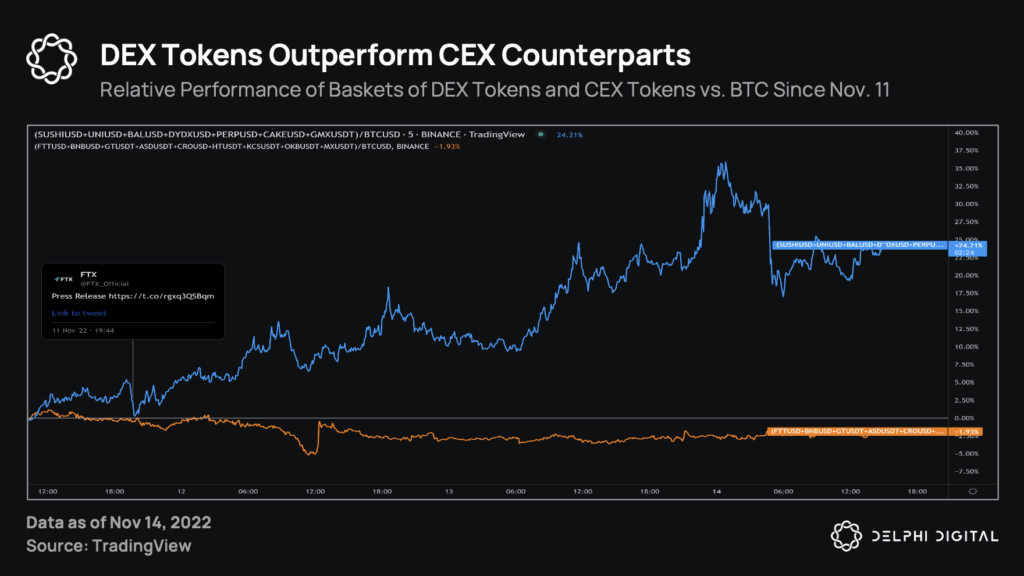 DEX basket of tokens consists of key players in the DeFi ecosystem, including , which popularized perpetual trading. Other weighted DEX tokens are UNI, , , , , and . They were pitted against the CEX basket consisting of FTT, BNB, GT, ASD, CRO, HT, KCS, OKB, and MX.

From Nov. 7 to Nov. 8, DyDx saw a massive +392% volume increase, followed by another +100% uptick from Sunday to Monday, at $1.05 billion. However, the wide-scale industry FUD has suppressed DyDx trading volume back to under the $300 million range.

Meanwhile, have been exiting CEX wallets at a record pace. According to glassnode, the BTC migration from CEX into self-custody wallets is unfolding at a historic rate of 106k BTC/month. Over the last week, this accounts for ~$3.7 billion worth of bitcoins.

Predictably, hardware wallet providers are having a field day. Both Ledger and Trezor are seeing historic sales numbers this week. 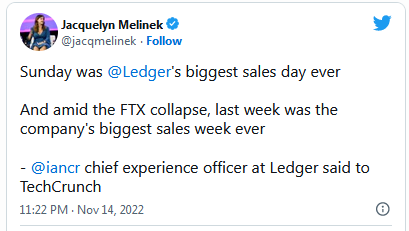 Likewise, Josef Tetek, Bitcoin analyst at Trezor reported an exponential rise in sales since November 7th. Predictably, Bitcoin dominance is also rising, just as it was after the meltdown. If one excludes manipulative centralized tokens like FTX (FTT) and non-crypto stablecoins, Bitcoin’s realized dominance is at an all-time high since December 2017, at 59%. 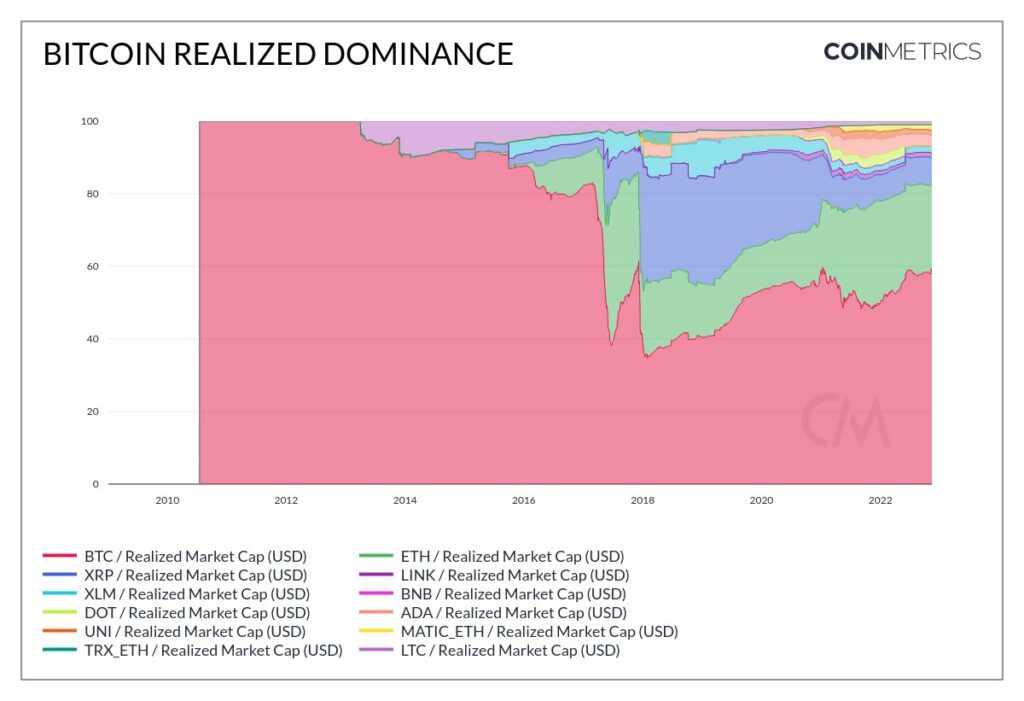 It seems that the FTX collapse served to further differentiate Bitcoin, as core P2P value without masters, against the centralized crypto layer built after Bitcoin popularized the very concept of digital assets.

So far, FTX’s multi-layered fraud revealed that the exchange misappropriated up to $10 billion to prop up SBF’s original venture, the Alameda Research hedge fund. Over the weekend, the situation was exacerbated with a purported hack draining at least $400 million from what was left of users’ funds.

“Our ADD that we had spent four years working on was now being used fraudulently with very little regard for our wishes. Now we are left with this – lots of questions.”

Overall, Blockworks research found that between 25% to 40% of crypto-oriented funds have their assets trapped or exposed in the FTX collapse. The contagion damage could then range between $1 billion to $5 billion, on top of lost user funds and the loss of industry-wide confidence.

How Does FTX Implosion Stack Up Against DeFi Hacks?

Comparatively, 2022 has been the year of DeFi hacks, at over $3 billion across 125 hacks. October alone had seen 11 hacks that drained $718 million from 11 DeFi protocols. Tellingly, most of the damage came from blockchain bridges, as well-known central points of failure.

Because these bridges serve as intermediary asset repositories between blockchain networks, hackers have been exploiting the lack of node redundancy to the maximum. Ronin Bridge, connecting to , is still the top loser at $620 million lost. Wormhole Bridge, connecting Ethereum and to , ranks second, at $320 million. In third place is Nomad Bridge, having lost $190 million.

However, even CEXes are not exempt from bridge attacks, as Binance Bridge was subject to a potential $600 million attack. Interestingly, Binance quickly halted it after CZ asked BSC validators to suspend operations, showcasing an upside in blockchain centralization. Where does that leave the crypto space?

On the DEX side of the equation, much work has to be done on code auditing, while CEXes are going in the direction of proof-of-reserves and proof-of-liabilities. As the third, originating party, Bitcoin remains a safe haven, immune to both code abuse and centralized scheming.

Reversal In Junk Bonds Would Be Bullish For Stocks

Reversal In Junk Bonds Would Be Bullish For Stocks