EUR/USD climbs on Powell’s speech, but look out for key indicators By Investing.com

Investing.com – Yesterday was a busy day for the , with gains in the morning, in the face of half-hearted European inflation figures, then with a correction in the afternoon, to finally post a strong upward movement overnight, helped by Powell’s speech which confirmed the prospect of a Fed pivot.

Indeed, while the Euro-Dollar tested the psychological threshold of 1.03 to reach a low of 1.0292 in the early afternoon, the currency pair then posted a powerful rebound that continued today, sitting at 1.0455.

Fed Chairman Jerome Powell said on Wednesday that the pace of rate hikes should slow down from here on out.

“The time for moderating the pace of rate increases may come as soon as the December meeting,” Powell said in a speech Wednesday. He added that the Fed’s monetary policy was moving closer to the level of restraint that will be sufficient to bring inflation down.

And while the Fed chairman also pushed back on market expectations of a pause in rate hikes, saying that the maximum rate level, or terminal rate, will have to be “a little higher than we thought at the time of the September meeting in the summary of economic projections,” that didn’t stop the dollar from falling back.

Indeed, expectations of a slower Fed rate hike to 50 basis points for the next FOMC meeting on December 14 have strengthened further following Powell’s remarks, with the currently showing a probability of over 80% for this scenario.

Looking ahead to Thursday, EUR/USD traders will still have several key economic indicators to watch, starting with new estimates for November in the morning.

In the U.S., the schedule will be busier, with household income and spending, and especially the index linked to household spending, deemed to be the Fed’s favorite inflation measure. A little later, investors will also have to watch the November U.S. .

Tomorrow, the focus will be on the for the month of November, for which the consensus forecast is for 200k new jobs, after 261k the previous month, for a of 3.7%, stable compared to October.

Finally, from a chart perspective, we note that the rise in EUR/USD since yesterday evening has led the currency to test its 200-day moving average once again, an indicator that the Euro has struggled to hold above since the first test on November 15. 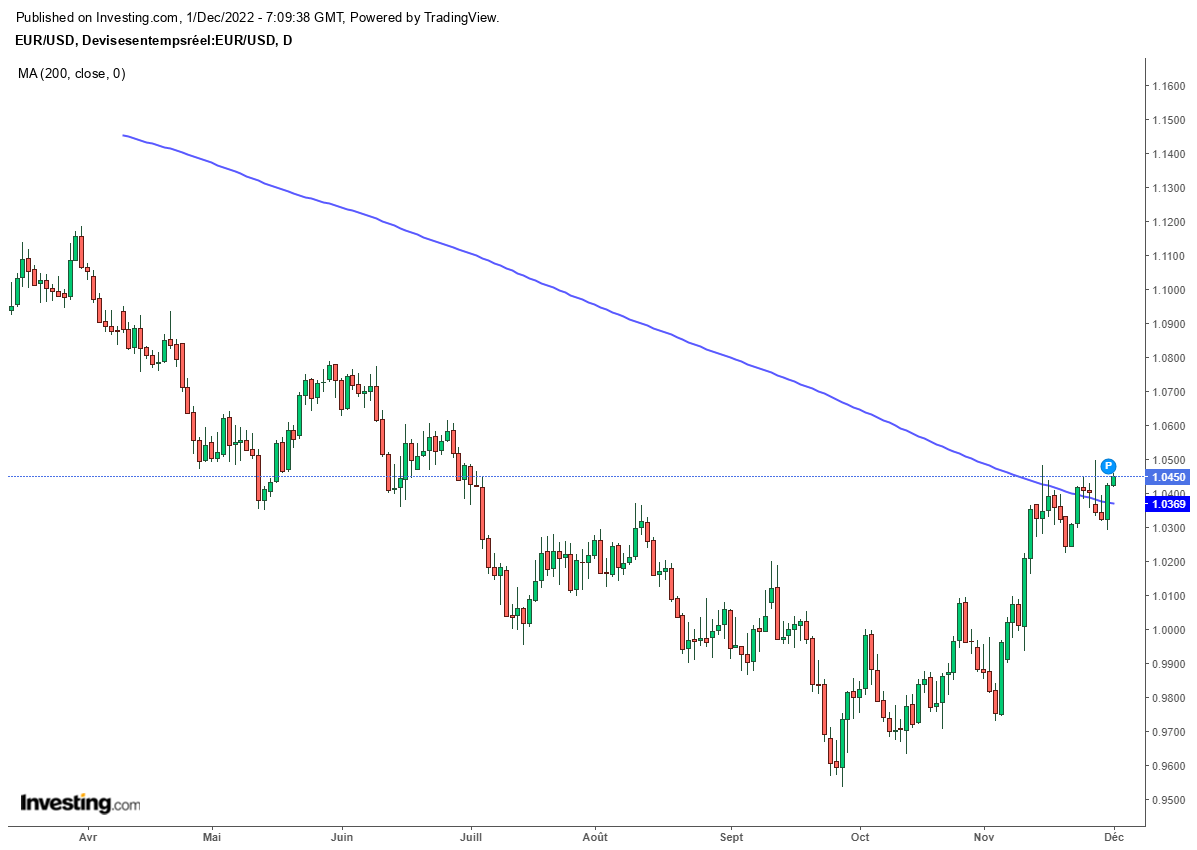 Find all the important statistics for EUR/USD and their results in real time in our economic calendar.