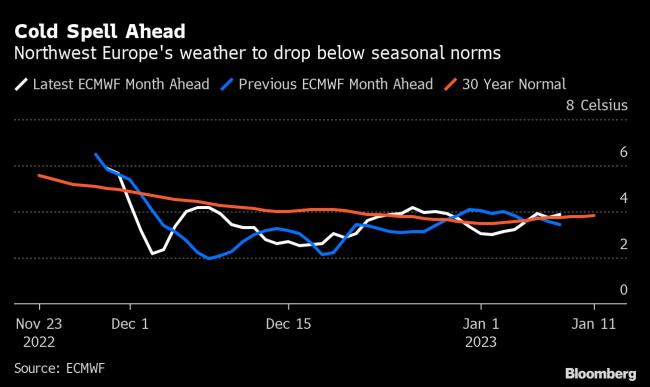 (Bloomberg) — Natural gas prices in Europe increased with a wave of cold weather set to boost demand and test the region’s preparedness for the winter amid restricted supplies.

Benchmark futures rose as much as 5.2% to the highest level since Oct. 13. Temperatures across Europe will likely plummet this month after a relatively mild November, and conditions could be cooler-than-average, according to Maxar Technologies Inc. and Marex.

A harsh winter could leave the continent more exposed to any further supply squeezes after Russia cut off most piped gas flow over the summer. Liquefied natural gas has helped replenish the missing shipments and fill reservoirs, but the stockpiles are starting to decline. Gas prices are four times higher than normal for this time of year, fueling inflation and hurting economies.

Europe has been trying to speed up building infrastructure to receive more LNG, with Germany expected to have its first import terminals ready this month. But if a cold snap also hits Asia, demand in the region could surge and heighten competition for cargoes, potentially driving up prices.

For now, China’s appetite for LNG have been limited amid a tepid economy and as elevated international prices make cargoes less attractive. LNG imports have fallen 22% until October.