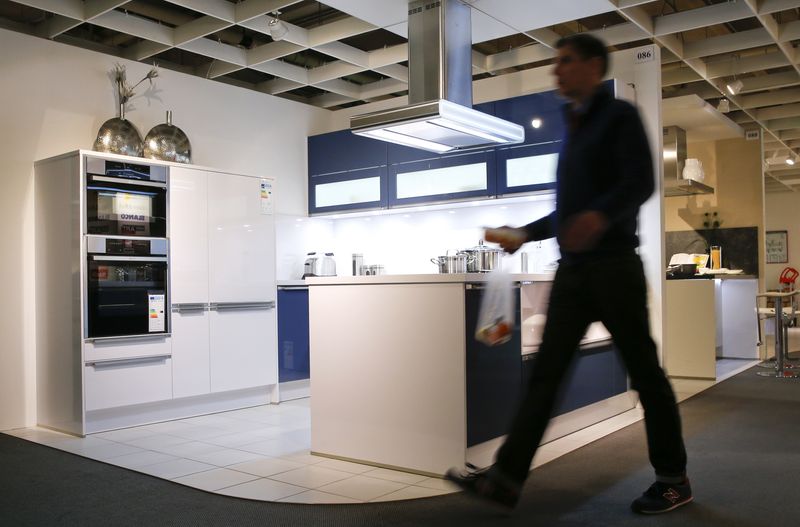 © Reuters. A man walks past at a kitchen by German kitchen maker Haecker inside a furniture shop in Berlin March 6, 2015. REUTERS/Fabrizio Bensch/Files

BERLIN (Reuters) – For 25 years, Theo Jost served the German Christmas dish of goose in his restaurant near the Black Forest. The birds were fresh, reared by farmers in northern Germany. But this year he took the dish off the menu because rising costs all along the supply chain would have doubled its price compared to last year.

That would be beyond the budgets of Germans looking to cut back on non-essentials amid a cost of living crisis fuelled by rising energy prices. They surged as the world emerged from pandemic lockdowns in 2021 and have been pushed yet higher in the stand-off between gas-rich Russia and the West.

Germans interviewed by Reuters said they were putting off spending decisions as inflation bit into their income, while a broad range of economic data suggest the picture will not improve for months into 2023.

Heavily dependent on Russian gas, Germany saw inflation at 11.3% in November according to the official European Union-wide harmonised measure – higher than the 10% average among countries that use the euro and well above the 7.1% of neighbour France.

It is set to become the biggest Group of Seven economy to fall into recession next year. The International Monetary Fund sees output shrinking 0.3% compared to albeit modest average growth of 1.1% across its benchmark of advanced economies.

As Europe’s largest economy, high inflation and weak growth in Germany matter for the region: on the one hand, it could help prompt the European Central Bank towards tighter policy; on the other, it drags on overall activity.

While its dependence on Russian energy is already stoking fears of long-term damage to Germany’s industrial might, the 43.5 percent annual increase it has seen in energy prices is also hitting consumers hard, fuelling wider price increases and biting into their disposable income.

“This is not just your regular recession,” says Ulrike Malmendier, an economics professor at the University of California, Berkeley who is a member of Germany’s SVR council of economic experts that advises the government on policy.

“We are dealing with the fact that we will have long term, significantly higher energy prices,” Malmendier told Reuters, adding that this could have a similarly long-term impact on consumer spending, which policy-makers would need to address.

Already, the SVR sees weak private consumption scraping 0.3 percentage points off total German growth in 2023, contributing to the recession that the IMF and others now predict.

As in other European countries, German wages adjusted for inflation were lower in mid-2022 than at the end of 2019, according to SVR figures.

But recent wage deals suggest they have more to fall: an agreement struck by the IG Metall trade union in southwest Germany that will set a trend for other deals fell short of inflation with a cumulative 8.5% increase spread over two years.

While some economists see inflation in Germany peaking by early next year, a number of domestic factors mean its impact on consumers will resonate for months to come in a country with a deep-seated cultural aversion to price rises.

Tobias Rademacher, a software developer from Leipzig, just received his new power bills for the upcoming year. He says he will have to set aside twice as much of his income to cover the bills in 2023, compared to this year.

But, in common with many in the local rental sector, his biggest fear is what comes later that year. German tenants pay monthly heating bills to their landlords – priced depending on the usage in the previous year. At some point in 2023, he and hundreds of thousands of others will receive a bill for his 2022 heating to recover additional costs from rising prices.

“For now, I’ve decided against planning a major vacation next year, because you simply don’t know what you’re up against,” the 42-year-old told Reuters, adding that even with what he calls a comfortable salary, he was also putting a new bicycle on hold.

Rademacher is not alone. Travel bookings are down 15% on last year, German travel agency ta.ts says, while OpenTable data point to a trend downwards in restaurant reservations.

The HDE retail association has warned its sector faces the biggest slump in Christmas sales this year since 2007. Discount retailer Primark said in November it was looking to reduce its presence in Germany as it grappled with weak sales and rising costs.

There is no easy fix to Germany’s energy problem, with research group Prognos predicting wholesale power prices rising to twice their pre-Ukraine war levels by the end of 2023.

“You can’t save on power or gas, and those are going to be more expensive next year,” Angelé said. “I fear that housing rents are going to increase more over the next years, and you cannot save on groceries.”

TOO LATE WITH STATE SUPPORT?

The low morale readings were further underlined in a recent cross-country study by EY consultancy which showed that 23% of Germans fear for their finances compared to just 16% in France.

That may come as no surprise. Not just energy costs but also food prices have increased more in Germany than in France: 18.9% in Germany in October compared to 12.9% in France, according to a harmonised index.

This is all the more of a shock in the land of low-cost retail forerunners like Aldi and Lidl because Germans for years could rely on relatively cheap groceries.

Hitting all food-importing nations, the war in Ukraine stifled supply of sunflower oil and raised prices for fertilizer, feed, and energy, necessary for the heating of barns, running production facilities, and transportation.

National policy has been a factor too. Some point to Germany’s late move to cap energy prices and contrast it with the much earlier move by France to support consumers with subsidies at petrol pumps and elsewhere.

Jeromin Zettelmeyer, director of the Brussels-based Bruegel think tank, said France may have acted faster because of “the higher sensitivity” to social unrest after the “gilets jaunes” (yellow vest) protests launched in 2018 against a government attempt to hike energy taxes.

Swiss inflation steady at 3.0% in November as expected By Reuters