Is Dell Technologies a Value Play — or a Value Trap?

Before the pandemic, in fiscal 2020 (ending January), Dell Technologies (NYSE:) posted adjusted net income of $5.5 billion. Roughly $2.3 billion of that figure was generated by VMware Inc (NYSE:), which Dell spun off last year. That left about $3.2 billion in net profit from the current Dell business.

In fiscal 2023, at the midpoint of fourth-quarter guidance, Dell expects to post adjusted net profit of $5.6 billion. The core question for DELL stock is whether that growth is good news — or the biggest reason to stay away.

There’s no question that, on a fundamental basis, DELL is cheap. After last week’s , the company gave guidance for the fourth quarter. Dell forecast adjusted earnings per share of $1.50 to $1.80.

At the midpoint of that guidance, the full-year figure would come in at $7.46. That, in turn, puts the stock’s price-to-earnings multiple under 6x, one of the lowest in the entire large-cap universe.

The question is: Why is DELL so cheap? Obviously, markets have sold off this year, but that alone doesn’t explain such a low multiple. 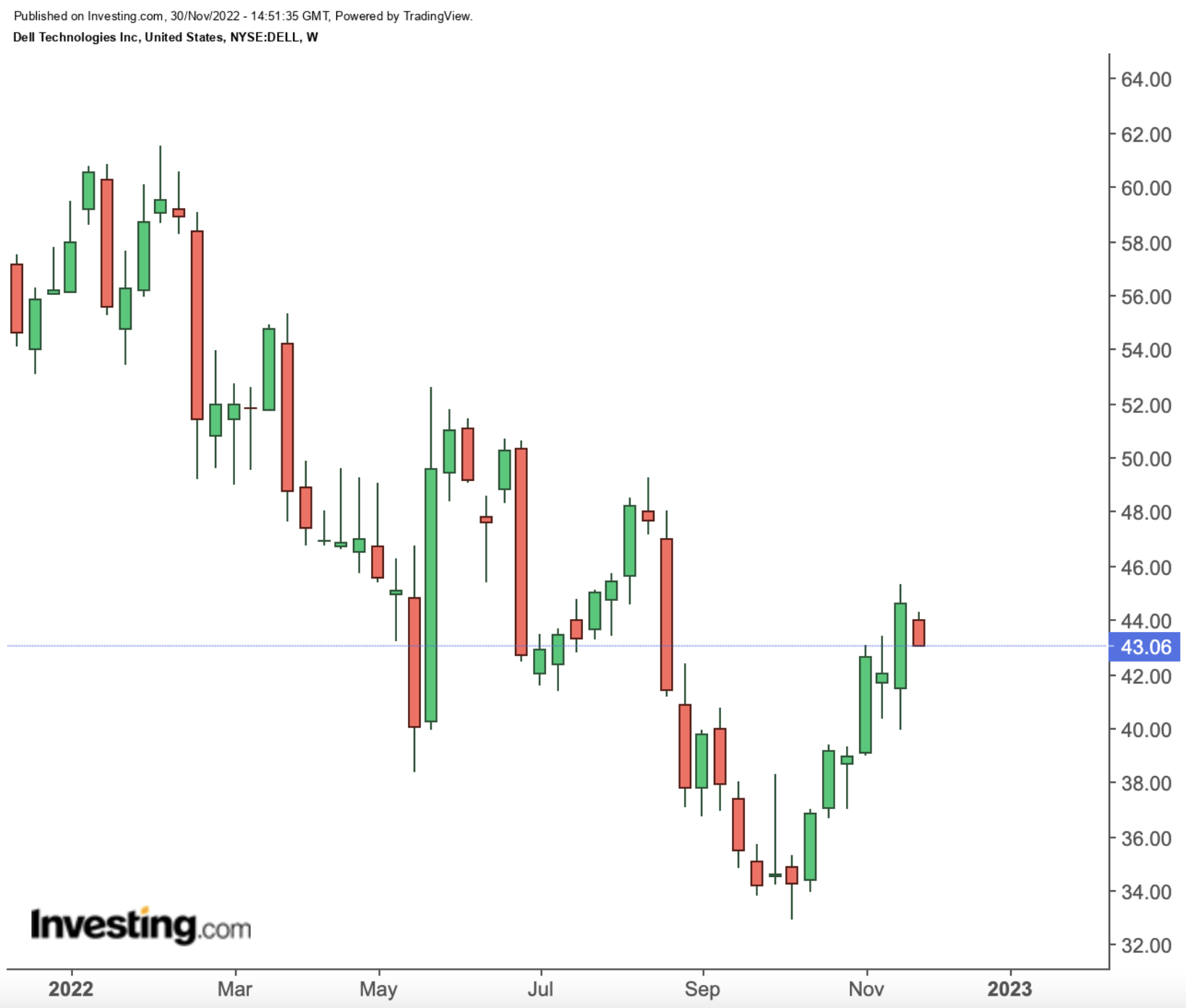 The risk is precisely the fact that Dell’s profits have grown so sharply. Those profits didn’t grow because Dell took a huge amount of market share, or released an in-demand product. Rather, they grew because the novel coronavirus pandemic arrived.

Consumers were flush and spent to upgrade their PCs. More importantly, corporations had to adapt to a new work-from-home environment, and spent heavily on IT equipment in the process.

In the first three quarters of fiscal 2020, commercial revenue in Dell’s Client Solutions Group — which includes personal computers and other products — was $25.7 billion. The year-to-date figure is $34.9 billion, up 36% over that period. Operating profit in CSG as a whole has more than doubled in four years.

That kind of growth is simply unsustainable. Demand going forward will moderate toward a more typical long-term rate. And before that rate is met, demand may fall significantly, given how many new units have been purchased over the past two-plus years.

This is precisely the bear case for so many companies following the recession — companies like recreational vehicle manufacturers or apparel stores.

To be sure, this bear case is not guaranteed to play out. But Dell is going to see a reversion to the mean in terms of performance. Indeed, the company’s guidance for Q4 assumes as much: at the midpoint, Dell expects revenue to fall some 16% year-over-year, and roughly 11% excluding the impact of the stronger .

And for fiscal 2024, management said after Q3 that it expects incremental weakness. Wall Street seems to agree, with consensus assuming a 9% decline in revenue and a 15% decrease in earnings per share.

This creates a short-term issue for the stock. It’s difficult for a stock to rally while it’s posting negative growth — and that is what almost certainly is on the horizon in calendar 2023. Some investors will see a ‘cheap’ stock, but others will wonder when, or even if, the declines will end.

There’s a long-term question as well. Assuming the business does revert back to the mean, DELL perhaps isn’t quite that cheap. The current market capitalization is almost 10x FY20 adjusted net income. If the Dell of, say, 2024 looks like the Dell of 2019, it’s not clear that the DELL stock price should rally much, if at all, from current levels.

After all, the Dell of 2019 — at least excluding VMWare — was not valued all that dearly. I know, because I owned the stock that year. Backing out the value of Dell’s 80% ownership of VMWare (which was publicly traded at the time), including debt, Dell traded in the range of 3x EBITDA (earnings before interest, taxes, depreciation and amortization).

The multiple now is about 4.7x on a trailing 12-month basis. But, again, those trailing 12 months include a material, unsustainable boost to demand. That tailwind is set to reverse this quarter by management’s own admission.

Without that tailwind, what’s left is a business heavily reliant on low-growth or even negative-growth categories. PC revenues were stagnant for years before the pandemic. Storage sales — 17% of total year-to-date revenue — were headed in the wrong direction.

Relative to current earnings, DELL looks cheap. But that appearance masks two big problems. First, current earnings are inflated. And, second, a stock with this kind of growth profile probably should look cheap.

Disclaimer: As of this writing, Vince Martin has no positions