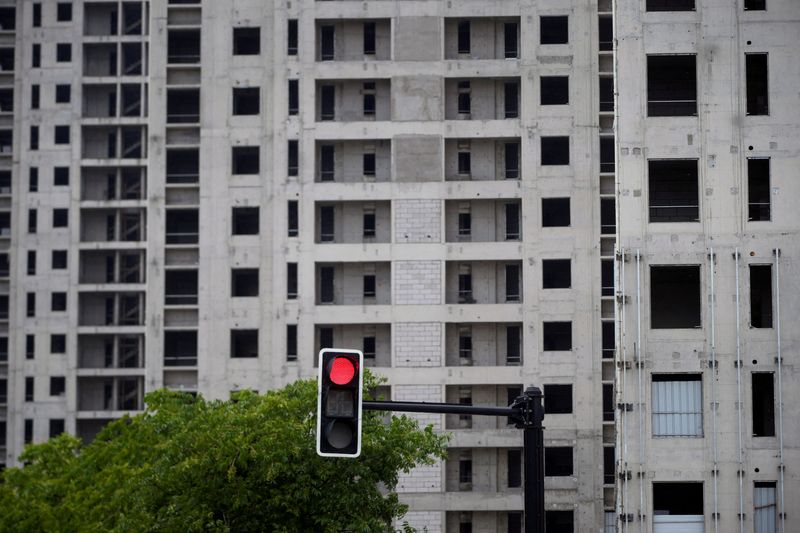 BEIJING (Reuters) – Prices for new homes in China fell for a fifth straight month in November, increasing the government’s challenge in stabilising the property development industry, a private survey showed.

New-home prices had been 0.06% lower in November than in October, when the monthly decline was 0.01%, said China Index Academy, one of the country’s largest independent real estate research firms.

Falling values are weakening the position of already cash-strapped developers with unsold stock.

The government moved in November to ease the industry’s liquidity crunch, which has stifled activity in a sector that accounts for a quarter of the economy and has been a key driver of growth.

On Nov. 11 the central bank rolled out a rescue package and this week the securities regulator lifted a ban on listed property companies raising capital through equity offerings.

Supportive measures will help, but full recovery by the sector will be hobbled by a shortage of buyers, say bankers, developers and analysts.

Pandemic-control measures are not helping, said two managers in the real estate industry, speaking about the sensitive subject on condition of anonymity. Demand is necessarily weak when buyers cannot leave home to inspect properties they might want to buy, the managers said.

Among 100 cities surveyed by the research firm, 57 saw November new-home prices lower than in October, when prices had been lower in 54 cities.

The Pearl River Delta city of Zhongshan saw the biggest fall in November, with prices down 1.45% from October.

Measured by floor area, the volume of home sales in the 100 cities was down nearly 30% from a year earlier, the firm said in a separate statement, partly due to stringent pandemic measures.

“It will take time for the property market to stabilize, because the COVID-19 situation is becoming increasingly severe and short-term downward pressure on the economy has increased,” said the research firm.

New-home prices will fall in the first half of next year before rising for the whole of 2023, economists said in a Reuters poll. They expected neither further stimulus measures nor loosening of COVID-19 curbs to support the crisis-stricken sector next year.

(This story has been corrected to say that the home prices fell for the fifth straight month, not sixth, in the lead paragraph)