With an understanding of the dollar’s role as the world’s reserve currency, it’s time to discuss how the Federal Reserve’s monetary policy machinations influence the and, therefore, the global economy and financial markets.

Given the Fed’s recent extreme monetary policy actions, which haven’t been seen in over 40 years, it is more important now than ever to appreciate the potential global consequences of the Fed’s stern fight against inflation.

In Part 1, we highlight the following two lines, which help describe Triffin’s paradox.

“Simply the growing divergence between debt and the ability to pay for it, GDP, is unsustainable.”

Increasingly borrowing without the means to pay it off is unsustainable. The terms zombie company or Ponzi Scheme come to mind when considering such a system. That said, because the printer of the currency and taxer of its citizens is in charge, we can only ask how long the status quo can continue.

The answer is partially up to the Fed. The Fed can use QE and low-interest rates to delay the inevitable. As we now see, the problem is that those tools are detrimental when there is high inflation. Fighting inflation requires higher interest rates and QT, both of which are problematic for high debt levels.

The Bank of England is bailing out U.K. pension funds. The Bank of Japan uses excessive monetary policy to protect its currency and cap interest rates. China encourages its banks to buy stocks. The dollar, the world’s currency, is on a tear, interest rates are surging, and the financial world is fracturing.

Most foreign nations’ economic and financial well-being is closely dependent on the value of the dollar and the supply of dollars. As such, the Fed’s actions in expanding or contracting dollar liquidity can ripple through the global financial markets. The Fed’s monetary policy is the monetary policy for the world, whether anyone agrees with it.

ECB’S PRESIDENT LAGARDE: WE HAVE TO BE ATTENTIVE TO SPILL-OVERS FROM THE FED POLICY.

The strong dollar is a problem for some countries- Jerome Powell

Over the past few years, the pandemic drastically changed the course of monetary and fiscal policy. Since 2020 the U.S. government has accumulated over $10 trillion in debt. To help markets absorb the enormous supply of bonds, the Fed bought nearly $5 trillion in debt. As a result of fiscal spending, the money supply surged higher, and inflation soon followed. 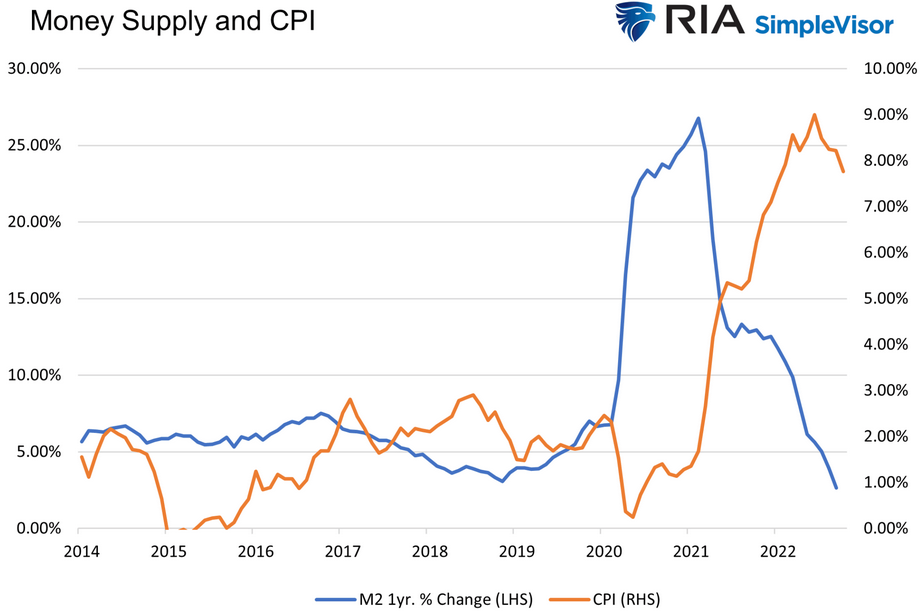 Prices spiraled higher due to weakened supply lines and massive fiscal handouts. Despite economic normalization and signs of brewing inflation in 2021, the Fed continued buying bonds and kept interest rates pinned at zero.

The ultimate time to fight inflation was before it was a problem. Being late to the game makes the inflation fight harder. In 2022, after inflation became entrenched, the Fed finally started acting.

To their credit, they have been highly forceful, raising rates by 3.75% in just ten months and commencing an aggressive QT program in June. The Fed was the first major central bank to combat inflation vigorously. While other countries sat idly by, the Fed became extremely hawkish.

Money gravitated toward dollars in large part due to Fed aggression. Confidence was growing among currency traders that the Fed was taking inflation seriously. Adding considerable strength to the dollar was that most other central banks were doing nothing about inflation.

Purchasing power parity (PPP) explains why currencies move against each other. In 1986, the Economist magazine popularized PPP with its Big Mac Index.

The theory underpinning the Big Mac index and PPP states that the exchange rate between two currencies should equalize the prices charged for a Big Mac or an identical basket of goods.

Simply, as prices rise by more in one country versus another currency, the exchange rates between the two must change to offset the difference. Not surprisingly, with the Fed leading the charge against inflation, currency traders flocked to the dollar. Based on PPP and two other currency measures, the dollar is now the most overvalued currency. 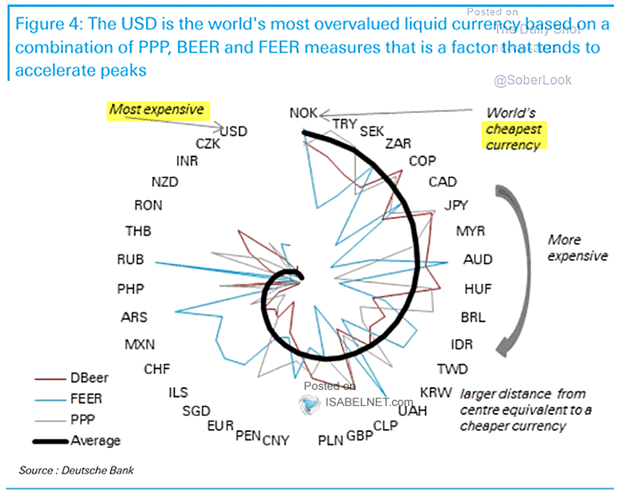 Why Does Dollar Strength Matter to Foreign Nations?

There are two primary reasons. For starters, many foreign borrowers borrow dollar-denominated debt. Second, changing currency exchange rates impacts the costs of goods bought and sold with other nations.

The BIS estimates over $13 trillion of foreign dollar-denominated debt outstanding. This debt poses a unique problem for its borrowers.

Here’s an example via the hypothetical Loonie Tire Company to help readers appreciate the impact of dollar strength. The table below shows that a five-cent appreciation of the U.S. dollar versus the has a significant effect on the firm’s debt terms.

Because the debt’s repayment occurs in dollars, the loan amount and the interest payments increase with the USD/CAD exchange rate. In our example, it boosted the company’s funding costs by roughly seven percent.

Most commodities and other goods are traded in U.S. dollars. As such, price changes for said goods in foreign nations are due to the combination of supply/demand dynamics and changes in the currency exchange rate.

We present the graph below to help appreciate how dollar strength impacts foreign prices. It shows the price of rose 11% more when priced in versus U.S. dollars since January. 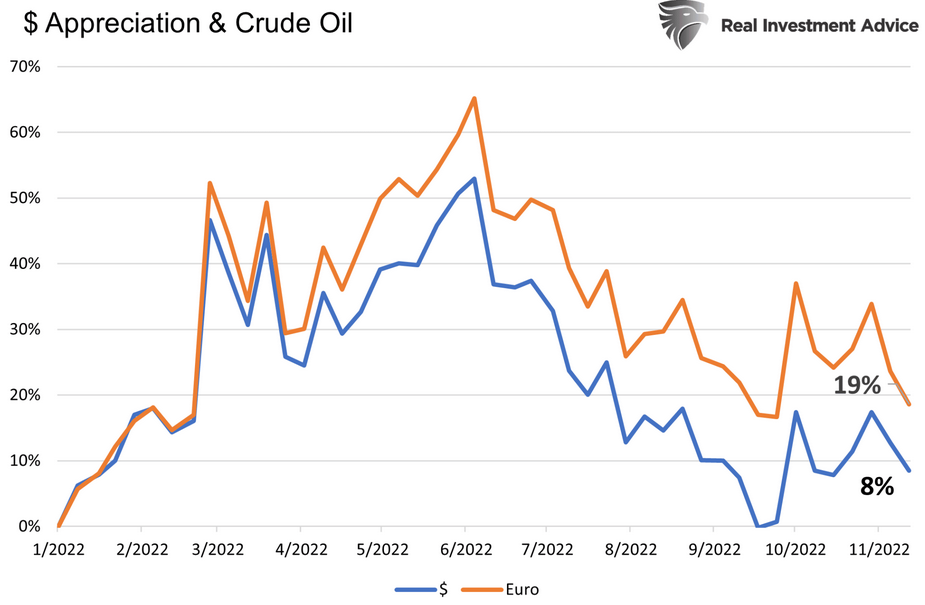 “We are addicted to our reserve currency privilege, which is in fact not a privilege but a curse.” –James Grant, Grant’s Interest Rate Observer.

The key takeaway we hope to impart is that Fed policy is the de facto monetary policy for the world. Whether foreign nations want or need tightening or easing, they are stuck with the monetary policy that the Fed decides America needs.

Today, aggressive Fed policy is creating havoc abroad. Like Japan, nations with slower economic growth and more debt can ill afford a monetary-tightening Fed policy. They are trying to counteract the Fed with zero interest rates and QE, but the result is a plunging yen and increasing inflation. Europe, China, and almost all other countries face variations of the same theme.