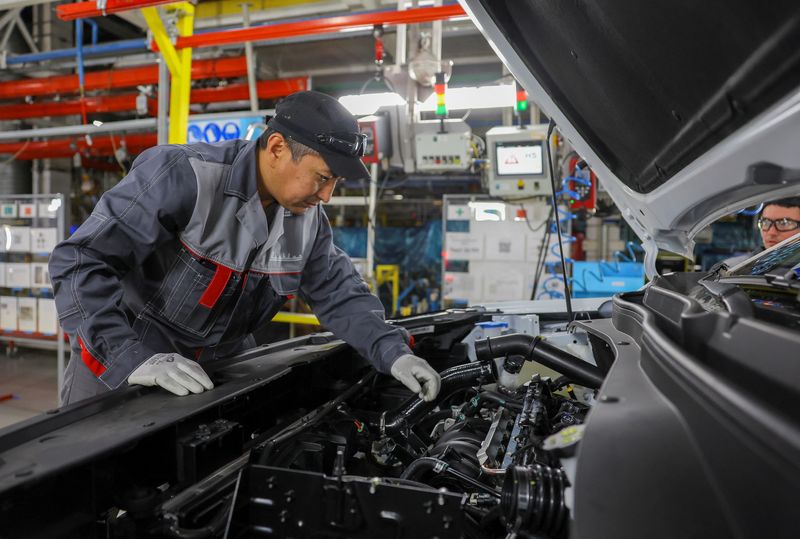 © Reuters. Employees work at the assembly line of the Moscow Automobile Factory Moskvich, after the production of cars under the Soviet-era brand Moskvich at French carmaker Renault’s former plant was launched in Moscow, Russia, November 23, 2022. REUTERS/Evgenia No

MOSCOW (Reuters) – Russia’s manufacturing sector expanded at its fastest pace in almost six years in November thanks to an increase in output and new orders, a business survey showed on Thursday, rebounding from a dip towards contraction last month.

The S&P Global (NYSE:) Purchasing Managers’ Index (PMI) rose in November to 53.2 from 50.7 in October, moving well clear of the 50 mark that separates expansion from contraction and reaching its highest since January 2017.

S&P Global said sanctions against Moscow, imposed over its actions in Ukraine, continued to weigh on foreign client demand, with new export orders contracting at a sharp pace for the 10th month running.

But the manufacturing sector has shown resilience.

“Despite a further sharp extension to supplier delivery times amid logistics challenges and disruptions, firms expanded their input buying at the fastest pace since January 2017,” S&P Global said.

Meanwhile business confidence, supported by hopes for new orders, surged to its second-highest since April 2019.