U.S. CFTC chair to be questioned over FTX collapse by lawmakers By Reuters 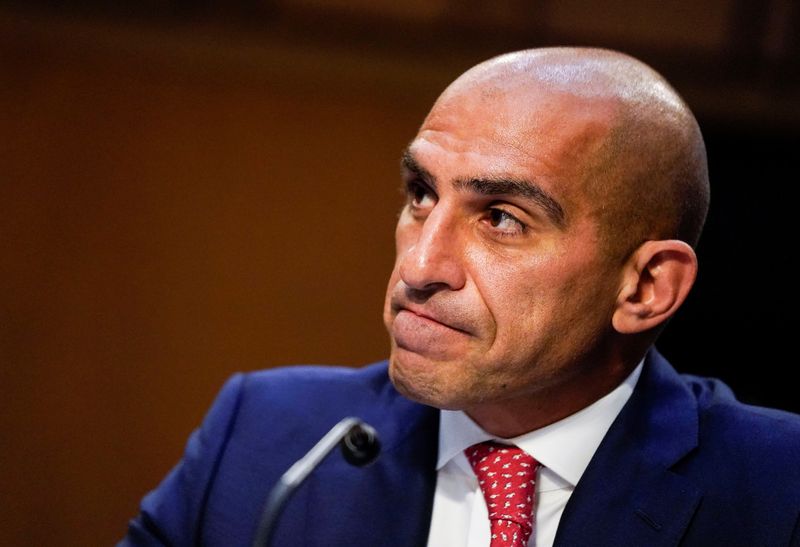 © Reuters. FILE PHOTO: Rostin Behnam testifies before a Senate Agriculture, Nutrition, and Forestry Committee hearing on his nomination to be chairman of the Commodity Futures Trading Commission (CFTC) on Capitol Hill in Washington, U.S., October 27, 2021. REUTERS/E

(Reuters) – A leading U.S. financial regulator is set to be grilled by lawmakers on Thursday about the spectacular collapse of cryptocurrency exchange FTX and whether authorities could have done more to prevent it.

In the first of several congressional hearings to examine FTX’s failure, members of the Senate Agriculture Committee are likely to press Rostin Behnam, chairman of the Commodity Futures Trading Commission, over whether the turmoil could have been avoided with better oversight.

The hearing, entitled “Lessons Learned From the FTX Collapse, and the Need for Congressional Action”, will take place at 10am Eastern Time (1500 GMT).

The committee, which oversees the CFTC, could also press Behnam on meetings between the commodities regulator and FTX staff, including founder Sam Bankman-Fried. The CFTC had “many meetings” with FTX over its application to directly clear customer trades, Behnam said Monday at a Financial Times event. The plan was pulled after FTX filed for bankruptcy.

CFTC declined comment. Offices for Sen. Debbie Stabenow, the Democratic chair of the Senate Agriculture Committee, along with its Republican ranking member Sen. John Boozman did not immediately respond to a request for comment.

FTX filed for bankruptcy and Bankman-Fried stepped down as chief executive on Nov. 11, days after traders pulled $6 billion from the platform and rival exchange Binance abandoned a rescue deal.

Behnam has previously requested more authority from lawmakers to regulate digital assets at the CFTC. Still, more clearly defined rules may not have prevented FTX’s demise, he said on Monday.

The CFTC, which typically oversees derivatives markets dominated by large players like money managers, has the authority to crack down on fraud and misconduct, but does not have the power to regulate spot markets.

Regulators are also squabbling over who should take primary responsibility for overseeing the crypto market. Many Senate Agriculture Committee members have previously agreed with Behnam that the CFTC should take on a larger role.

But the U.S. Securities and Exchange Commission has more expertise overseeing markets in which individual investors are involved. SEC Chair Gary Gensler has said he expects his agency to be the primary regulator because he considers most crypto tokens to be securities.

Thursday’s hearing could provide the first look at whether the FTX blowup has changed lawmakers’ stances on how to set up a framework for crypto regulation.

FTX’s downfall will be examined in several more congressional hearings this month, with the House Financial Services Committee set to hold the first in a series of meetings on Dec. 13.

The committee has said it expects to hear from Bankman-Fried, FTX and its affiliated trading firm Alameda Research, as well as Binance.

China and Powell Dominate Headlines , But Keep an Eye on OPEC+

China and Powell Dominate Headlines , But Keep an Eye on OPEC+